Following the unconditional surrender of imperial Japanese forces throughout Asia in 1945, nationalists declared the establishment of the Republic of Indonesia over the territory of the Dutch East Indies on 17 August.

Unfortunately, the Netherlands, itself just liberated from Nazi Germany occupation, fought a 'police action' to throttle the new republic until 1950.

On 21 July 1947, the Dutch military launched "Operation Pelikaan" and its coordinated attacks on AURI airfields destroyed much of Indonesia's air power. 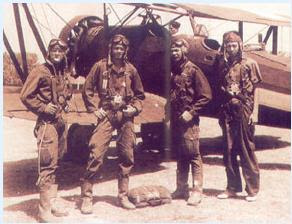 The three young men were Air Force cadets, and they had learned to fly the Japanese aircraft they had at their disposal simply by reading the manuals written in Japanese. In the absence of bomb bays, the pilots lobbed the small bombs from the cockpits of their fighter planes by hand. Because of this, the Dutch did not suffer any reported loss of life or great damage, though it probably did give them a scare.

Of course, the ragtag Japanese aircraft the occupiers had left behind in Indonesia were no match for the Dutch, whose American P-40 Kitty Hawk fighter planes then roamed the skies above Java with a vengeance. To avoid being intercepted, the Indonesian pilots flew just above the treetops. After accomplishing their jobs, they returned to base safely and the ground crew hid the planes under the trees.

According to Rahardjo Mustadjab, "the Dutch punishment came swiftly and severely":

The aircraft departed Singapore at 1:00 am WIB for Maguwo, the airfield at Yogyakarta. After a three-hour flight, and with landing gear descended, the aircraft was attacked by two Dutch P-40 Kittyhawks, destroying its left engine.

The aircraft went into a dive, first crashing into a tree then into paddy fields in Ngoto, Bantul. Only its tail remained in one piece.

Jos Heyman's Indonesian aviation 1945 -1950 described the Indian-registered aircraft, VT-CLA, as being previously owned by the government of the Indian state of Orissa but subsequently purchased in support of the Indonesian republic by Bijayananda Patnaik "who hailed from a family of freedom fighters, ideologues and patriots in Orissa ... [and who] had earlier been involved in the Indian freedom struggle and eventually became a leading figure in the government of Orissa."

'Biju' Patnaik's Kalinga Airlines had nearly a dozen Dakota aircraft that "would fly from Kolkata with fuel stops at Mohanbari and Singapore. It was during one such operation that he had rescued Muhammad Hatta, the then Vice President and the Premier Sutan Sjahrir and got them to India. The flights continued till 1949, and in the course of these supplies, there were four fatal crashes."

Patnaik was twice decorated by Indonesia with its highest civilian honour ‘and he liked to tell the story of how he persuaded its first president, Sukarno, to call his daughter Megawati (Goddess of the clouds).

At the time it was shot down by Dutch P-40s, VT-CLA was "on charter to the Indonesia government on a flight from Singapore to Maguwo."


The report continues to state that: 'Of course the MLKNIL has instructions to hinder republican air activities. Each aircraft that is over republican territory without clear markings and of which the pilot maneuvers in a manner that indicates he wants to avoid being spotted, in serious danger'. But nevertheless the orders were not to shoot an aircraft down but instead force it to land on the nearest airfield in Dutch control. The report further states that a warning shot was fired at the aircraft upon which the aircraft hit a tree and crashed. The passing of time make it impossible to conclude what actually happened.

Interestingly the aircraft's owner, Paitnak, demanded 10 million rupees from the Dutch government as compensation and eventually received a KLM DC-3.

29 July is Indonesian Airforce Dedication Day and three Indonesian victims of VT-CLA, Agustinus Adisutjipto, Abdulrachman Saleh and Adisumarno, have had airports named after them in Yogyakarta, Malang and Surakarta.

According to the Battle of Britain Monument in London, the Constantines and Hazelhurst are buried in a cemetery at Yogyakarta:

"Alexander Noel Constantine was born at Moama, New South Wales on 13th December 1914. He joined the RAF on a short service commission in May 1938 and in June 1940 he was serving with 141 Squadron at Turnhouse.

"He served with 141 throughout the Battle of Britain and beyond until 28th April 1941 when he went to 23 Squadron at Ford, operating Havocs on night intruder sorties. On 4th June 1941 he took up instructing duties at 60 OTU East Fortune, this was followed by a return to Defiants with 264 Squadron at West Malling on 6th October 1941 followed by a month at Fairwood Common with 125 Squadron. A posting to 87 Squadron at Colerne on Hurricanes also lasted a month before he was detailed to prepare for service in India, setting sail in March 1942. He commanded 273 Squadron in Ceylon from April 1942 until June 1943 in defence of the ports there.

"Constantine then took command of 136 Squadron at Baigachi. On 15th January he destroyed a Mitsubishi A6M-3 Zero and damaged another, on the 20th destroyed a Nakajima Ki 43, on 15th February another Zero and in March a Nakajima Ki 44. In April 1944 Constantine was promoted to Wing Commander and posted to a staff job.

"Released from the RAF in December 1946, he returned to Australia and began flying in the former Dutch East Indies area."

Constantine  is listed as one of Australia's "fighter aces" in World War II. The term is used to unofficially describe "any pilot who has downed five or more enemy aircraft".