on August 01, 2013
GM HOLDEN LTD, AUSTRALIA'S oldest motor vehicle manufacturer was established in 1856 as J.A. Holden & Co, a saddlery business in Adelaide. Evolving through various partnerships, Holden & Frost moved into the business of minor repairs to car upholstery in 1908. The company began to produce complete motorcycle sidecar bodies in 1913 and experimented with fitting bodies to different types of carriages. After 1917, World War 1 trade restrictions led the company to start full-scale production of vehicle body shells.

In 1919, Holden's Motor Body Builders Ltd was producing 12,000 units per year and, by 1924, had became the exclusive supplier of car bodies in Australia for General Motors of the USA.

In 1931 General Motors purchased Holden Motor Body Builders and merged it with General Motors (Australia) Pty Ltd to form General Motors-Holden's Ltd. Despite increasing conflict in Asia, there were early indications of export potential. Australian newspapers in 1938 reported news from GM-H that 24 "Chevrolet tourers were ordered for shipment" to Batavia (now Jakarta, capital of Indonesia), where GM had established an assembly plant in 1927.


Following World War 2, GM-H supported the Australian government's desire to see the development of a locally-manufactured car. With the assistance of a tariff wall, the Holden was launched in 1948 and soon dominated the Australian car market.

In 1956,GM-H commenced exports of the Holden, which were accepted by 17 countries, including Indonesia, within a year. In 1959, GM-H "shipped completely knocked down Holden packs to Indonesia for assembly" (also referenced as "Complete Knocked Down Holden Ute") - perhaps to Gaja Motors, an Indonesian "Government-controlled concern financed by the Bank Industri Negara" which had purchased GM's Indonesian assets in 1956.

Holden became a prestige car in Indonesia during the 1960s and the 1970s ... and there was an early controversy in 1967 when "members of parliament attempted to import some 150 Holden automobiles to be sold to themselves tax free."

The Holden appeal spread: "The Sultan of Yogyakarta, Hamengkubuwono IX - revered in the country as an independence hero - was very fond of his black Statesman. Kingswoods and Premiers were favoured by the country's upper middle class and elites," The Age's Tom Allard recorded.


By 1977, the US Department of Commerce reported, PT Tiara Biru, a Jakarta-based short haul trucking firm, had a fleet "of 40 1-ton capacity Holden (Australia) trucks" and PT Blue Bird Taxi owned "a fleet of 300 metered cabs and, 100 rental cars, all Holden (Australia) vehicles".

The Gemini, introduced to Indonesia in 1981, was also "used by taxi companies in almost all corners of the island of Java, including Jakarta and Bandung."

However, Tom Allard revealed, "in truth, the Australian car maker's glory years in Indonesia ended in the mid-1980s."

In 1995 the Indonesian government embarked on an economic nationalist program which included the development of a (60%) locally manufactured national car policy to be protected by tariffs from imported knocked-down vehicles.

Although the 'Timor Putra' project was to be hobbled by the mismanagement of President Suharto's family and the devastating Asian Monetary Crisis of 1997-98, it had the backing of  key industrialists, including Eman, then former chairman of the Indonesian Motor Vehicle Association (Gaikindo), who argued in 1996 that "the automobile industry in Indonesia depended too heavily on companies in Japan and the United States and that now is the time to develop its own competitive, national automobile industry."

By 1999, GM-H's export manager, Bob Branson, said the company "was considering only exporting to countries that would take at least 500 cars a year. For that reason, exports to Indonesia and Thailand are expected to be shelved." 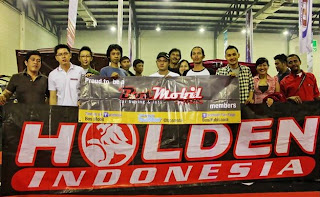 Thousands of Indonesians maintain and preserve Holden models of the 1960s through 1980s such as the Kingswood, Premiere, Statesman, Torana, Monaro, Sunbird, Comodore, Aska, Camira, Gemini and Calais. The Indonesian Holden Community, established in 2001, is registered with the Indonesia Automotive Association (Ikatan Motor Indonesia).

During 1998, General Motors-Holden's Ltd name was shortened to Holden Ltd. In 2005 it was changed again to GM Holden Ltd. The company is now struggling to maintain domestic market share and warns of possible closure of its Australian manufacturing plants.

You are welcome to add  further information in Comments below:
Business History Holden

Unknown said…
This is really great news for Australia. Thanks for putting all the history of this car in this blog. I must appreciate your efforts. I think that it might be more interesting if this brand alive in Australia.
Auto Parts Ballarat