Indonesian and Australian soccer: 85 years of tours, friendship and heart-break

on October 01, 2013
Reigning Australian A-League Champions, the Central Coast Mariners, had a disappointing finale to their participation In Indonesia’s inaugural Menpora Cup, an international invitational soccer tournament funded by the State Ministry for Youth and Sport which was played in regional cities Bandung (West Java) and Malang (East Java) between Indonesia’s Persib Bandung, Arema Indonesia, Mitra Kukar, Sriwijaya Palembang and Persepam Madura, the Malaysian U-23 national team, Loyola Meralco Sparks of the Philippines and the Mariners.

The Mariners made it through the group stage with relative ease but faced home town club Arema in the tournament final in Malang on Sunday 29 September with only a 13-player squad due to the club also having a match commitment in Australia on the same weekend.

Their opponent, Arema, is owned by the Bakrie Group, a major Indonesian conglomerate, which is also the controlling shareholder in A-League club Brisbane Roar.

According to the Mariners, their Indonesian campaign “came to a controversial conclusion with the team on the end of two highly contentious penalty calls and countless other suspect refereeing decisions as they lost 2-1 to Arema FC in the competition’s Final. St. Kitts & Nevis attacker Keith Kayamba Gumbs converted both dubiously awarded penalties to lift the popular local side to victory in front of 38,438 vociferous supporters at Kanjuruhan Stadion.”

Central Coast Assistant Coach Phil Moss said it was obvious any chance of a Mariners victory would have to come against all odds. “It is clear that only one side was meant to win tonight’s Final – and it most certainly wasn’t us,” Moss told club members.

“We have had a great time in Indonesia - the tournament has been well organised and the Indonesian people have been very friendly - but unfortunately the nature of the referee’s performance tonight leaves us with a sour taste in our mouths,” he said.

Governance aside, it is unfortunate that the great people-to-people friendship generated by football matches between soccer-crazy Indonesian and sports-mad Australia are rare events, despite the two countries’ close proximity.

And yet, Australian sports contact with Indonesia may have commenced with a football tour in 1928.

The New South Wales British Association Football Organisation received an invitation in 1923 from “a gentleman in Batavia” to send a team to tour Java the following season. However, there was to be a gap of a few years, during which Australians visiting the Netherlands East Indies (NEI) noted “the popularity of Association football with the Javanese.”

Travelling from 20 June to 23 August, 1928, the Australians played 23 matches, winning 17, drawing four, and losing two. Described as "Australia's first dedicated national sporting team tour of Asia," the Australians played in Makassar, Surabaya, Semarang, Bandung and Ceribon. Fixtures for Batavia were cancelled “owing to the unacceptable conditions proposed by the Batavian League” and four games were played in Singapore. Overall, the Australians reported, they "found the grounds good and the players in Java keen, although lacking in team work."

A highlight of the tour was Australia's 2-1 defeat by an All Java team in Surabaya, described as "one of the first representative matches of the Dutch East Indies national team against another official national team, NIVB having been a national association member of FIFA since 1924."


A second tour was announced in July 1931, when the Australian Soccer Association accepted the invitation of the Sourabaya Soccer Association. The squad again included players from NSW, Queensland, South Australia and Victoria, only one of whom had toured in 1928. Travelling from 9 August to 5 October,  1931, the Australians played 13 games - 11 in Java and two in Makassar -  winning nine games, drawing one, and losing three. Australian team official, E S Lukoman, told newspapers he was impressed with the improvement in Javanese football since 1928. "They control the ball better than the average Australian team," he said, "and their passing and position play was excellent."

In August 1981, Australia lost 0-1 to Indonesia in a World Cup qualifier in Jakarta, a shock loss that helped put New Zealand into the 1982 World Cup at Australia's expence.  Socceroos coach Les Scheinflug had decided to blood some young players, including David Mitchell, who was later to coach Perth Glory and accompany them on their 2008 program in Indonesia. In August 1990, Australia beat Indonesia 1-0 in a friendly in Jakarta, their last visit to Indonesia for another 19 years.

In 2005, however, Robbie Gaspar became the first Australian to play professional football in Indonesia when he signed with Persita Tangerang. His subsequent seven year professional career in the country included playing also for Persiba Balikpapan 2006-09, Persema Malang 2009-11 and Persib Bandung 2011-12 and his local popularity grew to over 52,000 followers at his Twitter account, @RobbieGaspar23. 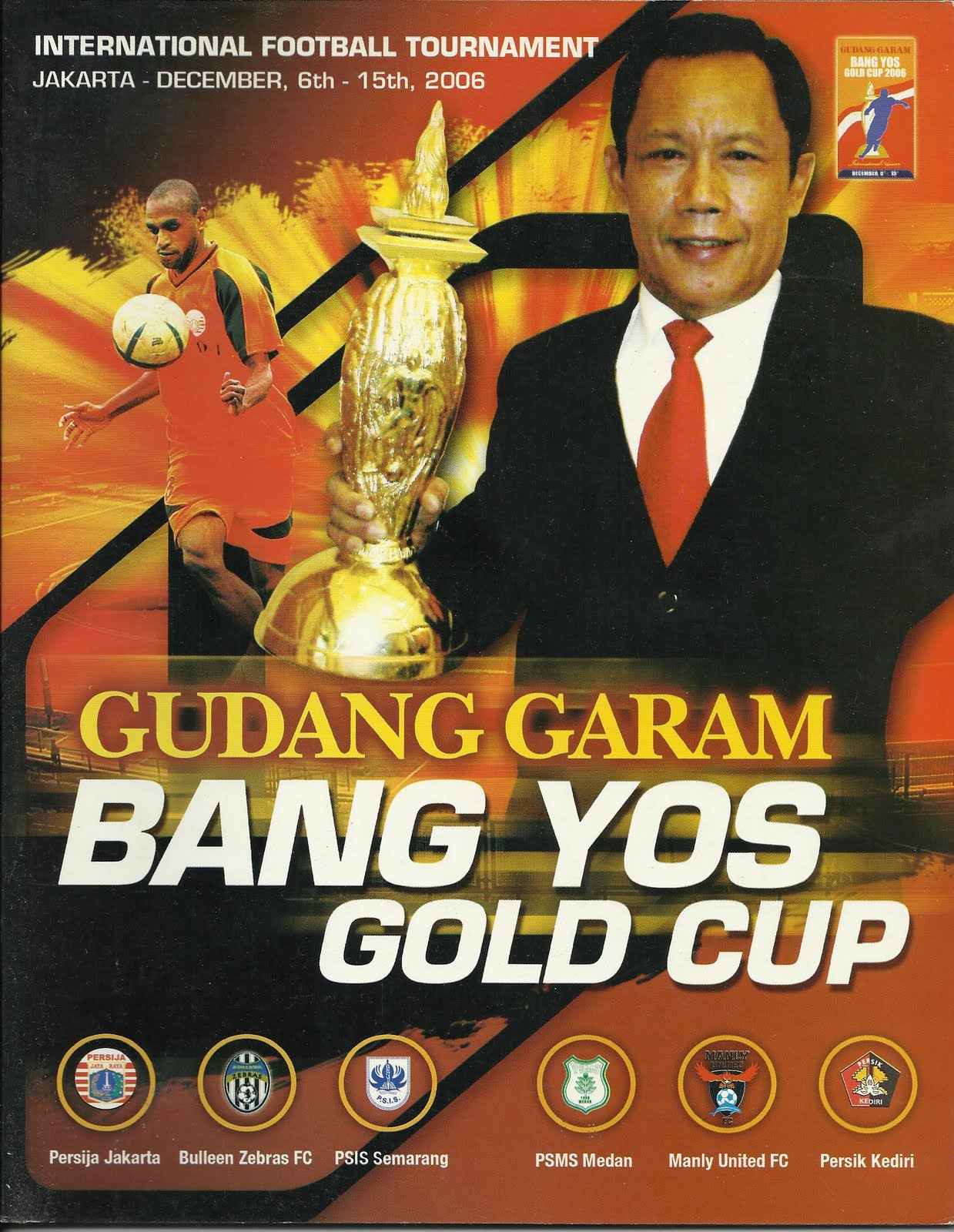 participated in a Jakarta-based friendly tournament, the Bang Yos Gold Cup. Phil Moss, who was with Manly United recalled “We were treated very well, the tournament was well organised and there were big crowds. It was a fantastic ten days away … The boys at Manly at the time saw what Asian football has to offer, and it was certainly an eye-opener for me as a coach.”

This resulted in the successful ‘festival of football’ played in East Java in June/July 2008, including a sports seminar, youth clinics, the visit of Football West's Premier League representative team to play an ‘international’ against the East Java U-23 (PON) team and the A-League’s Perth Glory pre-season training visit which included matches against Indonesian Super League clubs Persik Kediri and Deltras Sidoarjo. The game between Glory and then Indonesian champion, Kediri, played one week before the start of the new ISL season, was broadcast live on prime-time Sunday evening to a national viewing audience of more than 40 million.

Then WA Trade Commissioner to Indonesia, Martin Newbery, noted that the football tournament had had more coverage in Indonesian media than any other Western Australian promotion in the country in the preceding 20-years. “I can think of no better way of bringing Australians and Indonesians together than sport where a common language, interest and enthusiasm brings people together and develops friendships and contacts at the personal level,” he explained.

In 2008 Sports Dynamics also assisted the Northern Territory government to establish an annual Under-18 boys’ soccer competition “to further develop community and cultural links” between the Northern Territory and its neighbours - Indonesia’s Nusa Tenggara Timur province and independent Timor Leste. Sponsored for a further three years by Conoco-Philips, the Timor Sea Cup rotated between Darwin, Dili and Kupang until its 2013 program was suspended by the Northern Territory Government.

On 28 January 2009, Australia drew 0-0 with Indonesia in an Asian Cup Qualifying match in front of a crowd of 68,000 in Jakarta.  For the first time the Australian community was mobilised for the game: with assistance from Sports Dynamics the Socceroo coaches – including current  Mariners coach, Graham Arnold - attended an Australia Day BBQ in Jakarta, the Socceroos conducted clinics at a Muslim high school and the Australian International School, and ticketing was arranged for some 500 Australians to sit as a group in the West VIP section of the Bung Karno stadium (introducing the local atmosphere to most of the Australians attending and providing a colorful green/gold section for Indonesian national television).

As Robbie Gasper has detailed, little direct inter-relationship between the Football Associations of Australia and Indonesia for grassroots development has occurred since, mainly due to the calamitous rupture of the Indonesian football Association and League over poor governance.

“Some of the things I’ve seen and heard in the last seven years are a disgrace,” he's explained. “Football here is such a powerful tool that a lot of people want to get involved for the wrong reasons. I just want to see people getting involved for the right reasons ... We’re neighbours. There are 240 million people here compared to less than 25 million in Australia. Australia would be crazy not to tap into it, and Indonesia could learn a lot from Australia’s professional practices. Sport breaks down boundaries and football is a great way for Australia and Indonesia to communicate.”

Indeed, Robbie’s own encouragement of more than 20 Australian players to follow him to Indonesia during the period lead him to help establish the Indonesia Players Union, APPI, with the world body FIFPro, to protect the rights of local and foreign players. That important battle continues.

Although currently not resident in Indonesia, Robbie remains a contributor to Australian Sports Group Indonesia (asgi@sportsdynamics.biz) which brings together Australians dedicated to Indonesian community and grassroots sports, particularly AFL, soccer, rugby, cricket, hockey, athletics and administration. The group is preparing a brief on the Australian sports volunteer experience in Indonesia and its impact on Indonesia-Australia people-to-people relationships.

***
You are welcome to add further information, anecdotes and corrections in Comments below:
football soccer Sport