The formal start of the AEC on 1 January 2016 will combine 10 national economies including Indonesia. It will represent some 625 million people, a growing GDP close to US$2.6 trillion and eight percent of global FDI.  Last year Australia’s bilateral trade with ASEAN surpassed A$100 billion and its collective economies accounted for 15% of Australia’s trade, more than the second largest bilateral trading partner Japan.

At the conclusion of his IABW presentation, we asked him how Australian businesses have been reacting to the ASEAN economic integration story:

"There's a lot of interest, and a growing awareness," he told us. "It’s an iterative transition so it takes some time to absorb what it all means.

"We are very fortunate to have several very successful and identifiably Australian brands with very clear regional strategies.  We've heard today from ANZ about how they see the broader region, how they see the importance of integration, and about their strategy for it.

"Others have also grasped the integration trend and the implications that has for their positioning.  These businesses are squarely focused on investing time and effort to acquire in-market knowledge, expertise and relationships.  They are not there for quick wins but for long-term gains and market share.

"They appreciate that the ASEAN integration trend will spur growth and create opportunities for a wide range of business endeavours. Changes in the way the regional economy operates are unfolding in many different ways, dramatically in the case of, say, regional value chains, through to more nuanced and iterative changes in the enabling environment.

"Taken together and looked at over time, the changes will be dramatic and will be very good news for those who have moved at the right time.

"So there is clearly a growing appreciation of the opportunities, and an emerging sense of what’s required to prepare for them.”

Mr Merrifield kindly provided his most recent presentation for reproduction in the Indonesia Australia Review. It has been edited for publication:


What ASEAN Means for Australia

ON SUNDAY, 22 November 2019, leaders of the ten countries which make up the Association of Southeast Asian Nations will launch the ASEAN Community, which will include the ASEAN Economic Community or AEC.

This will be a key milestone in a long transition from a loose intergovernmental arrangement to something more integrated.

ASEAN has always been an important institution for Australia Governments. Well before it was fashionable, and well before ASEAN became a byword for Southeast Asia’s economic dynamism, Australia became ASEAN’s first dialogue partner in 1974.

The Department of Foreign Affairs and Trade, and the Australian Trade Commission (Austrade), set out their insights for business people in our publication “Why ASEAN and Why Now” - if you haven’t yet seen it, I commend it to you.

SINCE FORMING IN 1967, ASEAN has been a constant in Southeast Asia’s transition from a poor and turbulent region to one of prosperity and optimism.

Southeast Asia’s economic achievement has had many drivers but key among them is ASEAN’s success as an organisation.


Australia has worked closely with ASEAN over the decades of its remarkable journey.  Not just with its member states but with ASEAN as an institution.  We now have a strategic partnership and collaborate on major ASEAN-led arrangements, such in the premier leaders’ forum – the East Asia Summit, in the regional security and defence ministers’ fora,  and of course on the trade and economic agenda including negotiations for the Regional Comprehensive Economic Partnership (RCEP) .

We are ASEAN’s most comprehensive FTA partner.  We work together on regional economic integration, as we do in helping to address some of the downsides of integration, like human trafficking.

And we share robust trade ties, which now exceed $100 billion per year.  As an aggregated economy ASEAN is our number two trading partner.

So with those equities, we take very seriously the impending declaration of the AEC. This is a signature year for ASEAN and an important time for all of ASEAN’s key partners.

It is not always well understood what ASEAN intends the AEC to be. So it’s important to clarify that.

ASEAN has in mind an enhanced economic partnership among its members, and a partnership that looks outwards to the world.  It aspires to a single market and production base, achieved over time through the elimination of barriers to the flow of goods, services, investment and skilled labour.

It does not aspire to be a version of the EU.  It is not interested in EU-style strong central institutions.  It doesn’t want a common currency, or a customs union, or a single immigration zone.

Without dominant central institutions, implementation and compliance will sit with member states. They will proceed at different speeds reflecting their different stages of development, and it’s likely the AEC will work more seamlessly in some parts of Southeast Asia than others.

The transition will play out over an extended time-frame.  2015 is not an end point but a milestone - on a long journey that has already been underway for years.  There will be no sudden switchover to new arrangements.  But measured in five year chunks, progress will be impressive.

As it has been:  ASEAN integration has been occurring since the end of the Cold War.  Agreements in the 1990s put regional integration at the centre of ASEAN’s economic agenda where it has been ever since. That’s why tariffs have all but gone.

The World Bank says ASEAN’s integration project has gone well:  it has been trade creating rather than trade diverting; trade has become more efficient; it has helped attract FDI; and it has stimulated development in the less well-off member states.


SO ASEAN HAS BEEN a framework for liberalisation and reform, for advancing integration, for opening up borders and for enabling value chains. And it’s a pathway to help narrow the wealth gap between ASEAN’s richer and poorer members.

It has also afforded its Member States the collective weight to develop their economic engagement with the world beyond – we have seen that through the creation of valuable FTAs such as the ASEAN, Australia and New Zealand Free Trade Area (AANZFTA) and we are seeing it on a significantly greater scale through the negotiation of the RCEP.

This iterative integration is obviously important for the region’s continuing prosperity, but it is also strategically valuable because a more interdependent region raises the equities of all involved – the more we all have at stake, the more we all care about it not coming unstuck.

So the AEC is a fundamental part of what ASEAN has done and continues to do in the region.

ASEAN hasn’t just got lucky, as neutral turf at a time of intensifying geopolitical dynamics.  Rather, its track record of fostering trust has helped generate the all-important buy-in of external players to what it calls “ASEAN centrality’ – where ASEAN takes the role of ringmaster in regional organisations.

This is increasingly important as the global rearrangement of economic and strategic weight works its way through our region.

ASEAN’s export success has increasingly been built on a network of Regional Value Chains within and between countries in different ASEAN markets. Businesses in ASEAN have been developing strong trade and investment connectivity well before governments sought to enable it.

These RVCs have been a key contributor to the ASEAN connectivity agenda – they both drive economic integration and benefit from it.  The value chain connections in ASEAN are quite varied.  There are the obvious examples of manufacturers and component suppliers, but RVCs in ASEAN also tend to encompass a much wider group of relationships, such as R&D, logistics, administrative functions and marketing.

Why ASEAN Why Now goes into more detail on RVCs and why Australian businesses should find ways to tap into them. 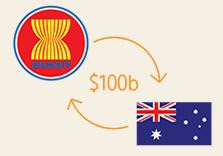 SMART BUSINESSES with an eye on this region have been reading the implications of the integration trend and thinking about how to develop regional strategies to their best advantage. If Australian businesses are to realise the most attractive opportunities, they will need an in-country presence in ASEAN markets and an appreciation of the unfolding changes.

As Australians, are we making enough of this?  It’s great that ASEAN is our second largest trading partner, and it’s great that investment levels in both directions are rising, but there is significant room for growth.  We are not a top-ten investor in ASEAN but in 2013 rankings Belgium and the Netherlands were.  Our competitors are certainly recognising the opportunities.

With some notable exceptions, Australian business engagement has been thinner than seems right for a region of such dynamism, such international focus, such proximity to our shores and so many ready pathways to greater engagement, including deep migration and educational links.

From a government perspective, we have been hard at work on our longstanding relationship with ASEAN, which has never been stronger or more important to us.  This includes the work we have done to improve the trading environment, using both aid-for-trade programs and through negotiating FTAs.

This includes our FTAs with individual ASEAN members and with ASEAN as a whole.  Indeed, AANZFTA is ASEAN’s most comprehensive FTA, and it’s been put to me by ASEAN trade officials that landing AANZFTA underpinned the ambition and confidence to pursue the RCEP vision.

In winding up, let me that the emergence of ASEAN as a leading economic player is good news for Australia. And that the AEC can only make this better.  To be sure, it’s a long game, with gradual changes, in an environment which rewards those who can adjust their thinking towards five-year horizons.  But ASEAN’s diverse markets, urbanised population, growing services sector and dynamic growth trajectory make a compelling case.

There is a strong fit between the region’s primary growth drivers and Australia’s capability to meet them.

I’d encourage you to take a closer look at what is on offer in the region and think deeply about whether an ASEAN strategy might work as you plan your businesses’ future growth.