on February 28, 2016
AUSTRALIA’S NEWLY COMPLETED Embassy complex at Jl Patra Kuningan Raya Kav 1-4 in Jakarta, Indonesia, is quickly being populated by staff of the Australian diplomatic missions to the Republic of Indonesia and to the Association of South East Asian Nations (ASEAN).

The complex also includes 32 four-bedroom apartments, and extensive recreational facilities including club-room, a swimming pool, two tennis courts and a multi-purpose sports court. While the Australian Ambassador to Indonesia, Mr Paul Grigson, retains the official residency in Menteng, the prestigious new residency within the complex will be home to Australia’s separate Ambassador to ASEAN, Mr Simon Merrifield.

Since work on the new facilities began in 2013, Australian diplomats have advised that the Embassy will resume its central role for Australian activities in Jakarta, particularly hosting meetings and social functions that were suspended after the deadly terrorist bombing of its premises in 2004.

A visiting delegation of Australian Philanthropy Leaders has claimed the title of “first external group” to visit the recently completed building. On 22 February they were welcomed by Mr Justin Lee, Deputy Head of Mission, for extensive briefings. 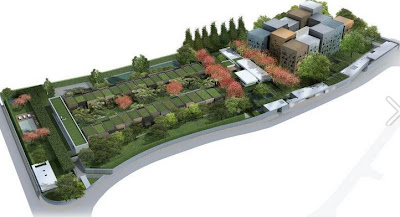 INDONESIA NOW with Duncan Graham said…
How is living inside this castle going to help our diplomats get closer to understanding Indonesia and its citizens? What sort of advice will officials be giving the Australian government when their view of Indonesia is through security cameras? The message being sent by this fortress to Indonesians is that we fear you.
9:28 am

Unknown said…
yes, the message being sent by this fortress to Indonesians is that we fear you.

how do we know the nature and behavior of the hospitality of the people, the population, the people by building a fortress-like embassy war.

If you want to know the people of Indonesia resident attitudes and behavior is not enough to just keep an eye on pedestrians from CCTV cameras in around embassies whether it is from Recreation, Residence, HOM head of mission and Chancery

But I guess the neighborhood community recognize

The embassy building fend off fears

Therefore do not want to know the hospitality of its neighbors in particular and the people of Indonesia in general
8:32 am