on February 12, 2016
By Mukund Narayanamurti 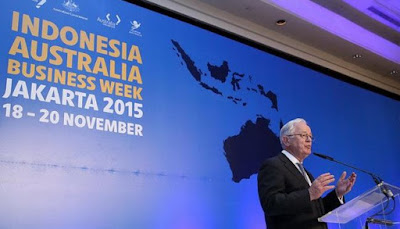 2016 MAY HOLD NEW prospects for deepening and diversifying the partnership with Australia’s closest Asian neighbour. Prime Minister Malcolm Turnbull’s visit to Jakarta in November 2015, which preceded the largest-ever Australian business mission to Indonesia led by Minister for Trade and Investment Andrew Robb, has paved the way for stronger economic ties between the two countries in 2016.

The historical peaks and troughs in the bilateral relationship with Indonesia have been well documented over time. However, the troughs have not fundamentally altered the need for Australia to view Indonesia as a significant strategic partner. Indonesia has the fourth largest population in the world with over 250 million people and an impressive GDP growth rate of more than 5%. It is the largest economy in Southeast Asia and the 16th  largest economy globally.

Indonesia is also the largest economy in ASEAN. It has a young and cost effective labour force which, with productivity increases over time, should be positioned to capture an increasing share of global manufacturing opportunities.

Yet despite its proximity, market size and potential, Indonesia is only Australia’s 11th largest trading partner. Annually, Australian businesses trade more with Singapore, Malaysia and New Zealand than with our northern neighbour. Similarly our level of investment in Indonesia often ranks behind many of our Asian neighbours including China, Hong Kong, Singapore, Japan, Malaysia, South Korea and Thailand.

This relatively weak economic relationship has no doubt fed into the political and diplomatic unease from time to time between our two countries. Strong business ties can often serve as an offset and help protect against escalating political tensions.

As his November visit showcased, Prime Minister Turnbull and President Widodo now have an opportunity to reset the clock and build a more trusting relationship between our countries.

The announcement by Minister Robb late last year to reinvigorate negotiations on a free trade agreement (the IA-CEPA) is therefore a welcome move.

These trade negotiations – combined with the outcomes of both Prime Minister Turnbull’s visit and the Indonesia-Australia Business Week (IABW) – are creating a window of opportunity to revitalise the economic relationship, based on the many complementarities between our two economies.

A number of Australian businesses are already seizing opportunities in the key sectors that IABW explored. For instance, South Australian jam and condiment maker, Beerenberg, has been selling jams to Indonesia since the mid-1990s. The company initially targeted luxury hotels. But Indonesia’s surging middle classes and their developing appetite for premium food products has meant Beerenberg now markets and distributes its products throughout Jakarta’s supermarkets.


Indonesia must be viewed as a partner and not competitor

According to data from ANZ Bank, the UN and others, Indonesia is expected to add 50 million people to its economically active population by 2050, ensuring it will continue to dominate the ASEAN labour force.

With around 45 million middle class consumers and over half its population aged under 30, Indonesia also has the potential to play a significant role in the development of Australia’s trade and investment engagement with the ASEAN region.

This is likely to become even more relevant with the formation of the ASEAN Economic Community (AEC) which came into effect from 1 January 2016. Serving as a single market and production base, the AEC will allow the free movement of goods, services, capital and labour.

This will also bring a refreshed focus to our ASEAN-Australia-New Zealand Free Trade Agreement, suggesting that it will not just be our recent free trade agreements with our three major North Asian trading partners that may be of focus for Australian businesses.

Despite the scale of the opportunity, Indonesia remains a challenging place to do business.

In the 2015 Australian International Business Survey (AIBS) commissioned by Austrade, the Export Council of Australia and Sydney University, almost 75% of respondents said Indonesia was a “more difficult” place (than Australia) to operate in. Understanding local culture, business practices and language were top of the challenges listed.

To maximise the complementary nature of our economies – and build business partnerships based on synergies rather than competition – a strong focus on relationships is needed at every level.

This will require a concerted investment to build relationships and develop understanding of Indonesia’s diverse culture and values – such as the country’s complex patron/client relationships and more deeply personal way of doing business.

As he strolled through the bustling stalls of Jakarta’s Tanah Abang Market, Prime Minister Turnbull was no doubt only too aware of the critical need to build an authentic relationship with President Widodo to truly realise Australia and Indonesia’s complementarities.

To embrace the opportunities on our doorstep, Australian businesses may do well to follow the lead of our Prime Minister.

Mukund Narayanamurti is the CEO of Asialink Business, Australia’s National Centre for Asia Capability. The Asialink Business Indonesia Country Starter Pack provides comprehensive and practical information for Australian organisations to engage with Indonesia. This article may be republished under a Creative Commons License.