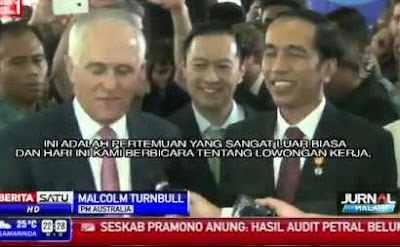 MUCH HAS BEEN WRITTEN about Prime Minister Turnbull’s wide-ranging speech last month in Washington DC at the Center for Strategic and International Studies. Yet little attention seems to have been paid to Turnbull’s remarks about Indonesia’s President Joko Widodo, commonly known as Jokowi.
Turnbull’s deep respect and admiration for Jokowi was on display as he recounted a brief story about how the two leaders paid a ‘relatively unannounced’ visit to a local fabric market in Indonesia late last year. Greeted by thousands of people, Turnbull described the ‘affection’ that Indonesians had for the ‘charismatic’ Jokowi as ‘really inspiring’.
Such a story of mutual rapport and respect feels a far cry from the public animosity between Jokowi and Turnbull’s predecessor, Tony Abbott, following the latter’s remarks linking humanitarian aid for victims of the 2004 tsunami with attempts to get clemency for two Australians then on death row.
Turnbull’s remarks also contained some powerful assertions about the leader of Australia’s largest neighbour. Significantly, he singled out Jokowi for the ‘vital role’ he could play globally in fighting extremism and insecurity. Turnbull’s assertion is based on the notion that the war against Islamic State is fundamentally a ‘war of ideas’ and as such it will take a strong counter narrative, more than any military solution, ultimately to overwhelm and defeat the group. As ‘the democratically elected leader of the largest Muslim nation in the world,’ Jokowi has ‘one big platform’ to promote such narratives, Turnbull believes.
Describing Jokowi as ‘a powerful advocate for moderate and tolerant Islam,’ Turnbull appealed for those present at his speech to support and encourage Jokowi’s work globally. For his part, Turnbull said he certainly encourages the President ‘to speak more widely and to speak globally’.
Whether or not Jokowi wants to exploit the platform afforded to him and assume a global leadership role is open to question. To date, Jokowi’s foreign policy has tended to focus on an agenda narrower than that pursued by his predecessor, preferring to focus on issues such as illegal fishing. Consequently, he has tended to opt for direct bilateral meetings with key allies over attending global gatherings such as APEC and the UN General Assembly.
Maintaining a regionally-focused foreign policy is both prudent and understandable, especially given that Indonesia is said to lose anywhere between $2-5 billion a year in revenue due to illegal fishing. However, using his voice on a more global platform does not necessarily have to come at the expense of Jokowi’s practical domestic agenda. Global engagement brings greater trade opportunities that leads to poverty alleviation and prosperity; it helps address global extremist ideologies that fuel terrorism and insecurity; and it provides a foundation for building trust and collaboration amongst countries, including neighbours like Australia and Indonesia, that is critical to address truly global challenges such as climate change.
The global community could certainly benefit from Jokowi’s approach to addressing terrorism as illustrated by his response to the recent bombings in Jakarta. Rather than using fiery rhetoric like that employed by many Western politicians, Jokowi reassuringly stated that, first and foremost, ‘people do not need to be afraid’. In doing so he, he denied the terrorists the escalation that their attacks had undoubtedly sought to ignite in an attempt to reinforce their black-and-white binary view of the world.
Avoiding the use of inflammatory language and not relying solely on the traditional security apparatus, Jokowi instead stressed the need to support the public educational campaigns of moderate Islamic organisations to counteract the extremist views of ISIS. Such an approach is in keeping with that which Jokowi pursued as Mayor of Solo when he oversaw the establishment of an interfaith group between Muslim and Christian leaders in a city that had been traditionally characterised as a safe haven for radical Islamic groups.
Turnbull is right to encourage Jokowi to take on a more global role. Praised by Globe Asia Magazine for ‘transforming the very fabric of society,’ Jokowi has shown himself capable of speaking a discourse and language that has the potential to catalyse transformation on a global scale.
Ending global poverty, addressing climate change and dismantling Islamic State’s agenda: all of these are impossible to achieve without Indonesia’s active engagement. For that reason, we add our voice to Prime Minister Turnbull’s and encourage Jokowi to take on a vital leadership role, both regionally and globally. The world cannot afford him not to.
Michael Sheldrick is the Global Advocacy Director of Global Citizen, which produces the annual 60,000-person Global Citizen Festival in New York now broadcast in over 160 countries. Stephanie Arrowsmith is an Indonesian-Australian social entrepreneur and Manager of Global Partnerships at StartSomeGood. This article may be republished under a Creative Commons License.
Australia diplomacy Indonesia Jokowi Malcolm Turnbull Tony Abbott

INDONESIA NOW with Duncan Graham said…
I hope the authors have extra information not available to the public to support their view that Mr Turnbull has 'deep respect and admiration' for President Jokowi, who only months earlier had rejected all claims for mercy for reformed drug traffickers.
Neither journalists' accounts nor the PM's official website reports of the visit support this opinion. The Australians were in Jakarta for less than a day, insufficient to form any sort of bond particularly between such different characters and cultures.
Jokowi is neither charismatic nor a powerful advocate. He was elected – and only just – not because of what he is, but what he’s not – an oligarch.
After the Jakarta bombing he flew back to the capital, which gave him enough time to have a strong speech crafted that could have lifted the nation’s determination to resist terrorism. He fluffed the chance. The people are not getting what they want, a son of Soekarno whose oratory inspires.
This piece reads like a self promotion, the chance to get ‘global’ into as many sentences as possible. Indonesia is far from being an international power – it has the population but no financial clout and under the present leadership is looking inwards.
The potential is there - but the realisation will take many years and new leaders.