on June 04, 2016
BEYOND HIS ESTEEMED reputation for journalism in Indonesia, Sabam Siagian represented his country internationally from as early as 1960 when he worked for the Indonesian 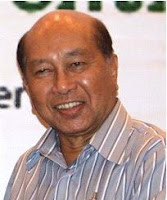 section of Radio Australia based in United Nations headquarters in New York. His reports, in the Indonesian-language, were broadcast to Indonesia from Radio Australia's short-wave transmitters in Melbourne. He returned to Indonesia in 1970 to work on the national afternoon newspaper Sinar Harapan. In 1983 he became the founding editor of Indonesia's first globally-focused, English-language newspaper, The Jakarta Post from where he was plucked by President Suharto to serve as Indonesia's Ambassador to Australia during 1991-1994. He also served as Chairman of the Indonesia Australia Business Council and as Patron of the now 20-years-old Australian International School in Indonesia.

I first met Sabam in 1990 when I interviewed him for a report on English-language media in Asia. He patiently explained to me how President Suharto had brought together five major domestic publishers to invest in a newspaper that would provide a window to the world for “alternative information about Indonesia" and which would also promote the study of English in Indonesia. The latter responsibility he said was so that Indonesia could be a full participant in ASEAN, the Southeast Asian regional association. ASEAN's working language is English which meant the Philippines, Malaysia, Singapore and Brunei managed agendas, chaired meetings and wrote the minutes for its constant events "and we Indonesians and Thais had to catch up."

President Suharto's appointment of Sabam as Ambassador to Australia was a surprising but smart move away from regular diplomat and senior military appointments who found Australia's suspicious media difficult to deal with. Current Foreign Minister Retno Marsudi recalls how Sabam's disposition gave her confidence as a junior diplomat in Canberra. In the aftermath of the 1991 massacre of mourners in Santa Cruz cemetry in Dili, East Timor, the Indonesian embassy in Canberra was blockaded by demonstrators. "It was very difficult," she recalled, "but I learned a lot from the way my ambassador tried to handle that issue: how to work very fast, how to engage journalists. I know it was a very difficult time for Indonesia but as ambassador he handled it in a very good way."


Sabam's people skills were also timely when new Paul Keating became Australia's new Prime Minister in December 1991 and was determined to raise bilateral relations with Indonesia to a new level as part of his "big picture" for modernisation. He frequently said that there was no country in the world that was more important to Australia than Indonesia. Sabam's ambassadorship helped ensure the success of Australia's ambitous, one-month-long 'Australia Today Indonesia’ business and cultural promotion in 1994 that attracted a rush of state offices and investment in Indonesia from more than 300 Australan companies.

Returning to Jakarta and journalism, Sabam continued his links with Australia through two terms as Chairman of the Indonesia Australia Business Council where he proved a great mentor and facilitator
for two-way trade and investment. He continued on as a respected advisor. With an eye to the next generation, Sabam also donated his time to the Patronage of the Australian International School (AIS), which has grown from one campus in 1996 to separate junior and secondary schools in Jakarta and campuses in Balikpapan and Bali.

I served on many business committees with Sabam and also eight years alongside him as an independent board member of the AIS Foundation. His great stories, gossip and insights were always memorable, as too his wisdom on the differences between Indonesia and Australia. One of his long-lasting critiques was on the need for both countries - government to government, business to business, and people to people - to constantly reinforce the shared positive experiences and to "be nice" to each other.

And it was not just a one-way demand on brash Australia (the conservative political side of which he tribally disliked). “We have never heard any [Indonesian] official publicly stating that the relationship with Australia is one of the most important for Indonesia," he told The Jakarta Post in 2012 durng  lobbying to smooth over the ruckus of the Julia Gillard government's 2011 unilateral halt of live cattle exports. "We should respond positively to Australia’s intentions to engage more with us. Indonesia should be nice to Australia, not for the sake of being nice, but for the sake of our national interests.”