After a bumpy gestation, the Indonesia-Australia enhanced free trade agreement - IA-CEPA - is now on its way to ratification 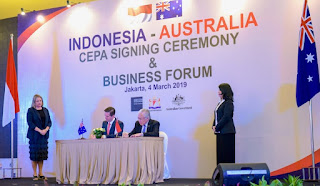 Commencing at nine o’clock, the morning of Monday, 4 March 2019, more than eight years of negotiations concluded with a business forum to accommodate the formal signing of the Indonesia Australia Comprehensive Economic Partnership Agreement (IA-CEPA) at Jakarta’s JS Luwansa Hotel. While parliamentary ratification is required, perhaps a scheduling problem with both countries facing imminent national elections, governments and business organisations are celebrating the occasion.

Co-hosted by Indonesia’s Ministry of Trade and Australia’s Embassy in Jakarta and supported by KADIN, Indonesia’s Chamber of Commerce & Industry, the signing ceremony began with remarks by Trade Ministers Enggartiasto Lukita of the Republic of Indonesia and Simon Birmingham of the Commonwealth of Australia.

Following the IA-CEPA signing, “congratulary remarks” were made by Rosan P Roeslani of KADIN, Innex Willox of the Australian Industry Group (AIG), and the head of Indonesia’s Investment Coordinating Board (BKPM), Thomas Lembong. The ceremony concluded with a speech by the Vice President of Indonesia, HE Jusuf Kalla.

Since the Joint Feasibility Study into a Free Trade Agreement between Australia and Indonesia conducted in 2007, and the negotiation process initiated by Australia’s then-Labor Trade Minister Craig Emerson in 2012, the business sector of both countries has played an important role in support of the governments, in recent years, through the Indonesia-Australia Business Partnership Group representing the ACCI, KADIN, AIBC and IABC, and IAG and APINDO.

While IA-CEPA focuses on eliminating tariffs between the two counties and addressing ‘Non Tariff Barriers’, Australia and Indonesia also agreed to a Business Partnership Group-endorsed proposal for a reciprocal Skills Development Exchange Pilot Project, allowing professionals from both countries to gain six months experience in the other's market. Australia will also provide opportunities for young Indonesians to gain experience and to assist regional Australia to meet seasonal labour requirements by providing an additional 3,000 work and holiday visas.

Prior to his flight to Jakarta from Perth, Phil Turtle said the AIBC “can really now push-on to get more businesses interested in Indonesia, and actively drive up the trade and investment figures between our countries. The IA-CEPA process in itself though has already been beneficial, with many initiatives established along the way, driven by the ongoing and regular dialogue between our business leaders together with their government counterparts.”

As the “peak, member-based body in Australia for the promotion and facilitation of bilateral business ties,” the AIBC sees “great potential” in the “historically underdone” trading relationship and looks forward to working with its members and key partners – including the Australian Government and the Australian Trade & Investment Commission (Austrade) - to ensure “business takes full advantage” and the Agreement is a “successful deal for all.”

James Pearson, CEO of the Canberra-headquartered Australian Chamber of Commerce & Industry (ACCI) said he was excited to be able to reinforce in person the Australian business community’s support for stronger trade, investment and people to people relations between our two countries. “The IA-CEPA has the potential to boost business and create jobs in both Australian and Indonesia. Launched by a Labor government and completed by a Coalition government, the agreement is an example of the bipartisan support for international commerce and economic engagement with our neighbours that a trading nation like Australia needs to succeed.”

Australia’s largest network of businesses, the ACCI has welcomed the efforts of both Governments, and their predecessors, to secure increased trade and investment to the benefit of both Australia and Indonesia and also looks forward “to reviewing the Agreement in detail and working with our members so that they can take full advantage of the opportunities that will be created."

Jakarta-based Brett Stevens, Victoria’s Trade and Investment Commissioner to South East Asia, welcomed “the further advancement of the negotiation process” and said the signing is “recognition from both sides that, despite significant domestic activities and issues being addressed from both Indonesia and Australia in regards to upcoming election processes, our relationship extends beyond short term political noise. The IA-CEPA will allow the commercial B2B, the real personal connections, to operate in a clearer playing arena, to the benefit of all Australians and Indonesian stakeholders.”