Indonesia’s food consumption and trade: will domestic reform keep up with demand?

“We expect food demand to quadruple by 2050 based on rapid growth in the country’s demand for more diverse and higher value foods such as meat, dairy, fruit and vegetables,” ABARES Executive Director Dr Jared Greenville says.

“This forecast strong growth in demand means that Indonesia’s agriculture sector will not be able to supply future food needs.

“It is likely that around three-quarters of the value of Indonesia’s food consumption will have to be supplied from imports by 2050.

“Recent policy reforms reflect this changing reality, with the new Omnibus Law aiming to remove penalties and restrictions on imports of some agricultural commodities.

“Nevertheless, Indonesia’s complex regulatory systems continue to pose barriers for exporters wishing to trade with Indonesia, and self-sufficiency remains the principal rationale for some regulatory restrictions.

“While there is enormous potential for Australia coming from the changes in Indonesia’s economy and regulatory framework, we expect progress for our exporters will be measured.”

The full report can be downloaded here 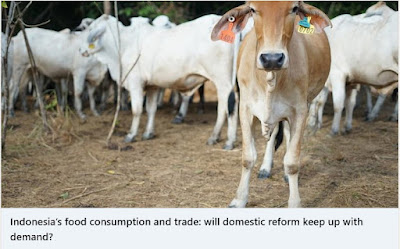 The new National Food and Agriculture Group of the Australia Indonesia Business Council will be holding an export to Indonesia workshop for the Goulburn Valley - Victoria's food basket - on 2 March at the Parklake Shepparton.

Details and free bookings to the face-to-face event are available via AIBC online here.