The Power of Sports Diplomacy: How we can grow Indonesia-Australia relations

It seems only yesterday I was presenting Monash University Masters student Ana Surjanto with her 'Mark of the Year' and 'Coach's Award' at the Krakatoas Football Club's 2018 annual general meeting.

Now, this Thursday 3 March 2022, she features in a very special webinar (with soccer's Robbie Gaspar) on 'The Power of Sports Diplomacy: How we can grow Indonesia-Australia relations' hosted by the Herb Feith Indonesian Engagement Centre" (free bookings here). 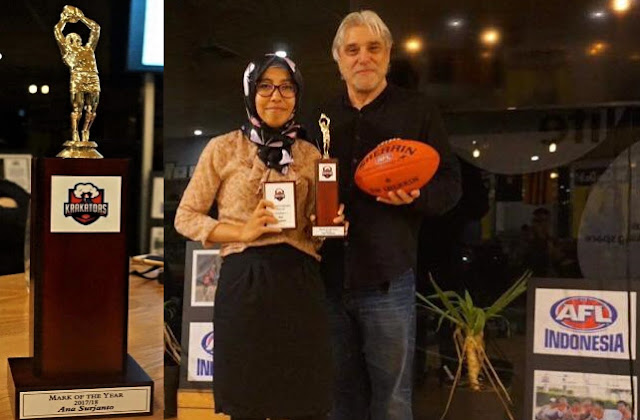 The Krakatoas are the Australian affiliate of AFL Indonesia which draws together Indonesia's Australian Football clubs, notably the Jakarta Bintangs Australian Rules FC and the Bali Geckos Aussie Rules Football Club, to promote Australia's indigenous football code, to mentor Indonesian male and female players and to enjoy playing footy together.

Led by founder Iain Shearer, the Melbourne-based Krakatoas' mission is to introduce Australia to visiting Indonesians through playing the mixed, non-contact Aussie Rules format and engaging in a socially inclusive local club environment.

After completing her studies in education at Monash, and in sport through the Krakatoas, Ana returned to Indonesia to teach and brought her new love of Aussie Rules football to her female students in Central Java.

You are welcome to add further information, anecdotes and corrections in Comments below: