Indonesia highlights an 8% increase in trade with Australia at its 2022 Trade Expo: via IA-CEPA the world's 13th-largest economy "an attractive market for Indonesia"

Indonesia anticipated the return of record numbers of international trade visitors to its annual Trade Expo Indonesia held at the Indonesia Convention Exhibition in BSD City, Tangerang near Jakarta, from 19-23 October 2022, where 100 trade deal transactions worth US$1.19 billion were recorded on the first day.

At the official opening, Indonesia’s President Mr Joko Widodo emphasised the theme "Strengthening Global Trade for Stronger Recovery" and his hope that TEI 2022 “will encourage a trade balance surplus in the future." 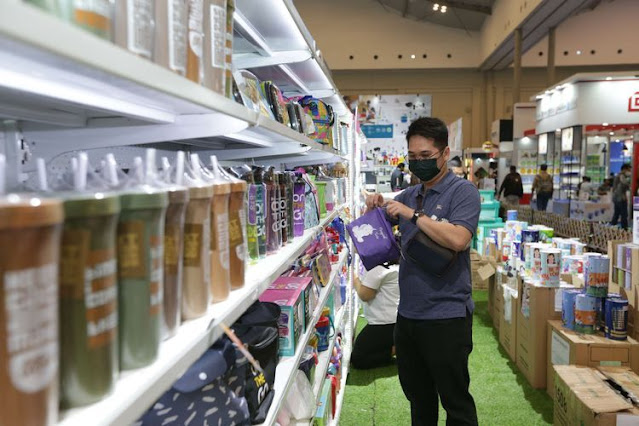 Minister of Trade Mr Zulkifli Hasan said it was necessary to accelerate Indonesia’s economic recovery, especially in the trade, tourism and investment sectors. He noted that as of September 2022, 27 international trade agreement negotiations had been signed and implemented and, “in addition, there are 17 agreements that are ongoing and 18 agreements in the exploration stage."


For the first time a parallel ‘virtual exhibition’ was also available on-line, staying open until 19 December 2022, and with hybrid access available, Indonesia’s Ministry of Trade continued to promote the TEI 2022 until its eve with late consultations with foreign businesses through the country’s diplomatic posts.

For instance, Indonesia's Embassy to Australia and Consulate General to Victoria held a business briefing in Melbourne on 5 October to promote the TEI for direct or online participation.  It was attended by Ambassador Mr Siswo Pramono, Consul General Mr Kuncoro Waseso, the trade ministry’s Director of Export Development of Primary Products, the Victoria Chair of the Australia Indonesia Business Council and local businesspeople. 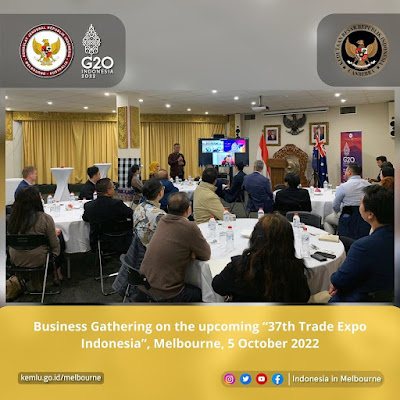 Australian interest in trade with Indonesia was reciprocated at the TEI by the Trade Ministry's Director General of National Export Development, Mr Didi Sumedi, through his presentation to the “Understanding the Australian Market" business forum, also attended by Australia’s Ambassador to Indonesia and Indonesia’s Ambassador to Australia.


"With the 13th-largest economy in the world, and geographic proximity to Indonesia, Australia is an attractive market for Indonesia," Mr Sumedi explained, adding that he viewed the Indonesia-Australia Comprehensive Economic Partnership Agreement (IA-CEPA) as the "most complete and deepest" international trade agreement as compared to others.

He noted that the increasing implementation of IA-CEPA has opened opportunities for Indonesian exporters to explore Australia's market. In addition to removing tariffs on imports to Australia, IA-CEPA also encourages potential "powerhouse" partnerships between Indonesian and Australian business sectors.

“For Australia, Indonesia is the hub in Southeast Asia and the main gateway in accessing the Asian market. As for Indonesia, Australia has a special position as the gateway to the wider Pacific region," he said.

"According to Statistics Indonesia (BPS), during the period between January and August 2022, the total trade between Indonesia and Australia increased by more than 8% as compared to last year."

However, Antara reported that in August Indonesia's trade with Australia "experienced a deficit of US$678.6 million, with the main commodities contributing to the deficit being cereals and mineral fuels."

By optimising the IA-CEPA, existing opportunities can be used to bolster Indonesia’s exports to Australia, including through small and medium enterprises (SMEs), which are the backbone of the country's economy, Indonesian Ambassador to Australia Mr Pramono remarked.

The IA-CEPA is more than just a trade agreement and is an important framework for the next phase of Indonesia-Australia economic relations, she said.

Indonesia & Australia: Together we can achieve a recovery that’s sustainable (21 February 2022);

After a bumpy gestation, the Indonesia-Australia enhanced free trade agreement - IA-CEPA - is now on its way to ratification (4 March 2019);

Emerging challenges in Indonesia and their impact on business with Australia (20 January 2016);

Activating business as a constituency for the relationship means getting more Australian companies into the Indonesian market – not just exporting to it (7 September 2015);